HELP US GIVE HOPE TO THESE PEOPLE
7

Together, we have had an impact on a thousand families.

Help us continue to improve the quality of life and to breaking the poverty cycle of the most disadvantaged.

Sponsoring one person will allow them to received medical care that will improve their quality of life. Some suffer from handicaps that keep them from working and from even meeting their basic needs.
For others, their small handicaps have major negative impact on their lives, for example: not being able to get married.

Contact us to sponsor a patient or make a donation 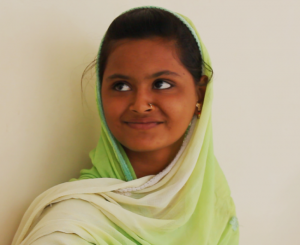 In 2016, we changed Reshma’s life. Reshma is a 14-year girl from a village 22 kilometres from the Julia Hospital. She is the oldest of 3 children. Her father drives a taxi and her mother is a farmer. Reshma’s hands were burned at the age of 8 months when she touched a piece of coal in the kitchen. This accident resulted in the loss of the function of her hands, thus preventing her from writing and also ruining her chances of getting married. When she was 10 years old, her family paid 30.000 Rupees ($450 US) to a private hospital in Mumbai for surgery that unfortunately did not work.

The Freedom from Poverty Foundation met the family in 2015 to evaluate the young girl. During the 2016 mission, the foundation’s surgeons were able to remove the scar contractures and to realign her fingers using skin graft techniques and orthopedic equipment.

Today, Reshma is able to write in school. She now hopes to achieve her greatest dream of becoming a computer engineer. 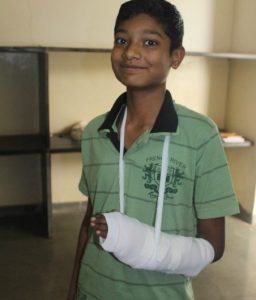 In 2016, we changed Sarthak’s life. Sarthak is a young schoolboy who is 14 years old. At the age of 10, he was hit by a car and suffered serious injuries. He was taken to a hospital in Pune where he underwent surgery on his forearm. Unfortunately, the operation was not successful since the family did not have the means to pay for the postoperative care. The bones in his wrist continued to grow unaligned causing loss of mobility in his hand and wrist. The operation he received at the Julia Hospital from the Freedom from Poverty Foundation gave him back function in his hand.